Failure to Launch Our RV

There might still be a few people throughout the world who are not fully aware of exactly what a cool dude I am and why.  Of course, there are too many reasons to list in this forum as to why I am cool, but one clear reason is my truck.

My pickup truck is a Ford F250 XLT Superduty Supercab 4 wheel drive with a 7.2 Diesel engine.  Enough said.  I am jealous of no one with the possible exceptions of those with the King Ranch or even Lariat package.

My truck is so cool that one of my Texan brothers-in-law, after seeing mine, bought one just like it to pull his RV and boat.  More recently, my father-in-law, who art in Texas, traded in his silly Dodge pickup for a Ford F150 (note: 150 vs. 250) which is almost as cool.  He did one-up me by getting the Lariat package, which includes leather seats.  I covet those leather seats.

Anyway, back to my truck, I had a little disappointment last Thursday.  In my previous post, RVing Further, I described how we fixed up our newly purchased used RV trailer.  We are itching to actually use it.

We have suffered three disappointments.

The first weekend we planned to go, Miss Sugar, my trophy wife, suffered an allergic reaction to a medication and made a trip to urgent care rather than a camping trip.  So we rescheduled for the next weekend, which was last weekend.

Well, above I said that last Thursday I had a little disappointment.  Since I have such a cool truck, I was not concerned about pulling the RV.  Turns out, I was wrong.  Turns out that my very cool truck shut itself off as if out of fuel, despite having plenty of fuel.  When I failed to restart it, I called good old AAA for a tow.  Then I called Miss Sugar to come get me.  Then I tried to start it again and was successful so, optimist that I am, I called AAA and cancelled the tow truck.  After two miles, I called AAA again and informed them of my new location in a truck that died.  Oh, I told Miss Sugar too.

I had drifted into a safe haven in the middle of Mountain Avenue in Old Town Fort Collins.  When the tow truck arrived, the driver said he could not hook up my truck from its position and asked me to help him push it into a preferable angle.  So I started it up again and backed into an appropriate position for towing.  Thus the truck  made me look as if I did not need a tow.  However, I had learned my lesson and insisted on the tow nevertheless.

When we got to the repair garage, I informed them that I needed the truck to be ready to take on a trip the very next day, Friday.  I was very clear as to my needs and schedule.

So the truck was ready on Monday, which some of you readers who learned the days of the week will recognize came at a time after the weekend.  That means we did not go on our weekend trip with the RV.  It needed a new sensor and some other stuff that only cost $420.  We look on the bright side.  Now it does not take as long to count all our money.  Oh well.

Miss Sugar, a kind soul, comforted me.  “We can always go this weekend.”

We could, except it snowed last night and more snow is expected tonight.  But who knows, we might give it a whirl.  Stay tuned. 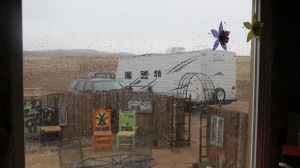