The Lost Is Found 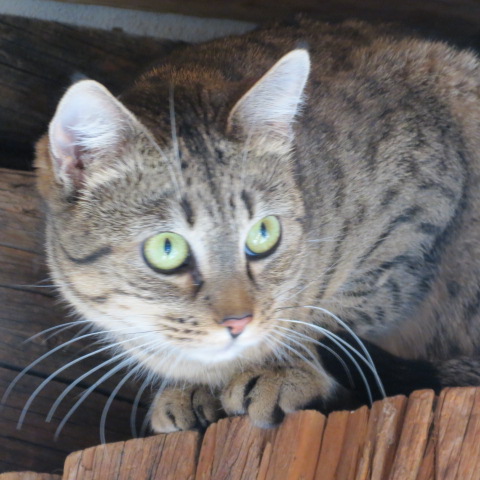 Long-time readers will recall our concern that our barn cat was missing. We worried that she was the victim of coyotes but we found no signs of a struggle in the barn.  We speculated that an eagle might have whisked her away.  We searched along the river.  We put out a trap in the barn to catch the predator who came in there to get the cat, in case that had happened.  I don’t know whether raccoons kill cats, but they could be attracted to cat food.  (Yes, we fed our barn cat and did not force her to only catch mice, but she did that too.)

We were very sad.

Today we are very happy.  Well, kind of happy, but also frustrated.

This afternoon, Sugar went to the post office.  On the bulletin board there, she saw a sign that said, “Found!  Is this your cat?”  And there was even a photograph of — our cat.  Sugar called the number.  She recognized the voice of the person who answered.  It was Cheryl, one of our few and far between neighbors.  She lives over a mile away, as the crow flies, but over two miles, as the road winds.

Cheryl told Sugar that the cat in the photo has been hanging out in her barn with three other cats.  We went to her barn immediately.  We found the three cats who are supposed to live there.  They came out of hiding when Sugar called  them and banged a dish with canned cat food, the way she used to call the feline formerly known as our cat.  It did not appear.

Sugar and I agreed that if we were cats, we would rather live in Cheryl’s barn.  They even plug in a water dish so it does not freeze.

Sugar said that it hurts her feelings that after all we did for our cat (including my design of an elevated feeding system so the dogs did not bother her while she dined), she ran away.  We feel like unfit cat owners.  Like our kids were put in foster care due to our neglect.  We deny that we were unfit cat owners.

We can’t understand where we went wrong. I comforted Sugar by blaming the usual suspect, our rascal of a dog, Beau.

I said, “Wouldn’t you rather live with three other cats than with Beau?  He probably said something that hurt her feelings.”

“But he let her eat his food,” Sugar reminded me.

“Well, that is my theory and I am sticking to it.  In fact, if you want more cats, let’s give Beau to Cheryl.  Then all the cats will move to our barn.  Cheryl will probably move here too, and leave Beau at her nice house.”

Since we did not find the cat in Cheryl’s barn, she will call us when it shows up again, now that she knows to whom it belongs.  It was nice of her to put up the “Found” posters.

We will hurry right over when we get that call.  We will bring Beau.  Sounds like a good trade.  Good for us, at least.

6 thoughts on “The Lost Is Found”