Pros and Cons of Bowleggedness

For my entire life, I have been bowlegged.  I did not have rickets.  I attribute the condition to riding horses and genetics.  Many fine athletes, such as Gale Sayers and myself, are bowlegged.  It gives us a better base for our superior balance than if we were, heaven forbid, knock-kneed.  Tacklers find it much easier to tackle players whose knees collide anyway.  One might be able to tackle a knock-kneed player with one hand, the knees being so close together and all.  As everyone knows, Gale Sayers and I can only be tackled with great difficulty.  An opposing player can barely reach around both knees at the same time.  I don’t know if Gale likes to ride horses, but I do.  Again, the advantage for a bowlegged rider is obvious.  But enough about me and Gale.

Let’s contemplate the legs of my lovely wife, Miss Sugar.  I doubt that prior to this very day she ever desired to have bowed legs.  For example, when she won the swimsuit event in the Miss Texas pageant, she did not have bowed legs and it is possible that she might not have won had she had bowed legs.  Of course, that is speculation, but nevertheless, Sugar has never seemed envious of my legs.

Today Sugar learned that her legs, as good as they might look, are not as functional as the bowed legs of me and Gale Sayers.  I will tell you what happened today.

As we were talking to a lady in the front yard of a suburban neighborhood, she told us to watch out because a loose dog was coming towards us.  The large dog approached from the rear.  Suddenly, he was in front of me, having passed between my legs.  It was like going under a  bridge.  I do not recall feeling any contact.  He just walked through.  I had an adequate inseam as well as space between my knees.

Then he tried the same thing with Sugar.  It did not go so smoothly,  The dog nearly knocked her down when he tried to go between her legs.  He did not have room to maneuver once he tried to squeeze through.  He got into the tight space and panicked.  Sugar had to move forward with him to try to keep her balance because he was so tall that she was almost sitting on him.  It was like she was riding him.  They moved forward together for nearly ten feet.  Finally, the dog was free again.  Sugar kept her balance.  The danger had passed.

Sugar might be re-thinking which of us has better legs.

The photo above was displayed for weeks at a gallery of photography.  It was larger than life-size in the front window.  These are Sugar’s actual legs.  They served her well for modeling and girly things but, let’s face it, as Gale Sayers could tell you, they really would not work for a running back in the NFL.  Just sayin’.

I am the fella wearing a blue shirt and white hat.  Note how a large dog could run between my legs.

My mother raised  her children in a stable, fun, and loving home.

Of course, there are other maternal situations that are not so heart-warming.

Not all mothers are good mothers who deserve praise and recognition.

Not all good mothers are appreciated.

Today can be an emotionally painful one for some women.

Some wanted to be mothers but are not.

Some regret  having children they mistreated or abandoned.

Some are mourning children who died before them.

Some are good mothers whose children ignore them, even today.

Some are missing mothers who are deceased.

If you have been blessed with a loving mother, show her some love. 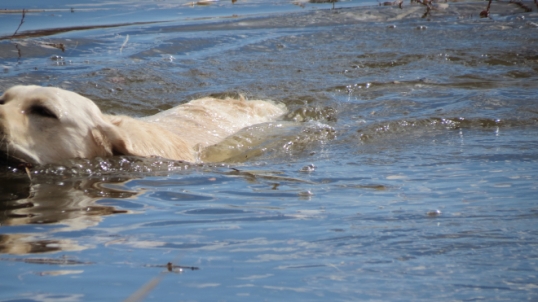 Gus, who used to be our baby puppy, is now eight months old.  He has reached the age to try out for the swim team.  So he did.

We have a river running through the ranch, only 100 feet or so from the house.  Beau is an expert swimmer.  In fact, in another post I wrote awhile back, I described him swimming across a lake in order to help some fishermen who were, well, fishing from a boat.  Beau disturbed their attempt to sneak up on fish.  Later, he went to the dock and located the fish that had been caught and took one.  Theft is a wrongful taking with the intent to permanently deprive the owner of his property.  Maybe Beau intended to bring the fish back, except he did not.

Gus idolizes Beau.  When Beau went swimming, Gus tried to emulate him.  At first Gus stayed in the shallow water and pretended to swim.  He kept his back legs on the bottom and slapped the water with his front paws.  After awhile, Miss Sugar threw a stick into the channel.  That action presented a dilemma.  Gus loves to fetch but he did not know how to swim.  He whined like a baby as the stick drifted past him.  Then instinct kicked in.  He is, after all, a Labrador Retriever.

So, since that fateful day, Gus heads for the river every chance he gets.  He swims his favorite stroke, Dog Paddle.

Just like a big boy.  A proud member of the swim team.