Archive for the tag “animal control” 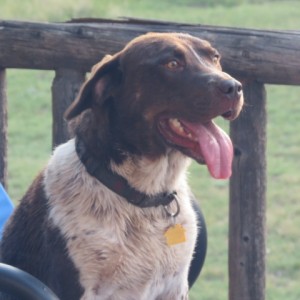 For those who read my July 2nd post, called Rover, it might be interesting to know what Paul Harvey called, “The Rest of the Story.”  Rover is back.  He’s back at Cross Creek Ranch.  How did that happen?

We had called Animal Control to come pick up the stray dog who came to our house on July 2nd.  An officer took the dog to the Humane Society.  We hoped that the true owner would be looking for Rover.   Anyone looking for a lost dog can call the Humane Society.  It even has a website that posts photos of lost pets.  This one was described as Springer/Lab mix, about two years old.  We expected the owners would recover the dog from the Humane Society.  But what if they did not?  Then what would become of him?

Miss Sugar’s sweet heart led her to call the Humane Society and tell them that if the owners did not claim Rover, we would adopt him.  We did not want him euthanized.

He was not claimed.  He was not euthanized.  He was adopted.  By us.  We brought him home today.  Home to the place where he had shown up on July 2nd.  So who really adopted whom?

We hope his roving days are over.

Here is why we did not attend church yesterday.  We intended to go, but something got in the way.

Miss Sugar looked out the window and said, “There’s a feral dog in the yard.  Get our dogs inside or they might fight.”

We started using the word “feral” during the wildfires in our county.  In my post “On the Run,” I wrote about two dogs that seemed to be pets who were now on their own and looking for something to eat.  They were scared and took off.

Now we had another visitor.  I hurried to the back door, where our two labs, Max and Sadie, were lounging on the deck, oblivious to any threat.  I opened the door and they entered at a leisurely pace.  As soon as I shut the door, the strange dog came up on the porch, right up to the glass door.  Our dogs did not notice.  Apparently, they are not watch dogs, but they sure can swim.

The wild, feral, trespassing dog was wagging his tail.  Maybe our dogs had assessed the situation and decided he was not a threat.  Maybe they had already gotten acquainted.  Our visitor’s ribs were showing.  So Miss Sugar gave him a dog treat, which he gobbled up.

I went outside and petted him.  He was not vicious or scared.  He was glad for the attention.  He was brown and white, with freckled legs and floppy ears.  I did not recognize the breed.  He probably has more than one breed in his DNA.

Miss Sugar thought she recognized him as our neighbors’ dog.  When we say neighbors, we do not mean folks whose radio we can hear.  We mean people in a house we can barely see, which is across the bridge about a mile away.

So I tried to lure Rover into the Pathfinder with two more treats.  He did not jump in, so I took a chance and lifted him up to the passenger seat, then gave him a treat.  I ran around to the driver side.  By then, he was occupying the driver’s seat, yet he let me in without jumping out.

We drove to the neighbors’ place, which involves opening and closing a gate.  He stayed in the car as I took care of the gate.   We found that no one was home.  I had no writing implement, nor paper, nor anything to attach a note to their door, so we went home.  Miss Sugar provided pen, paper and tape.  So we went back.  This time I let him out of the car, intending to leave him there.  I posted the note and drove along the ditch road back toward home.  Rover gladly followed me.  He even forgave me when we arrived at Cross Creek Ranch at the same time.  I told Sugar that he did not act like the neighbors’ place was familiar to him.

So Miss Sugar called Animal Control.  We live 20 miles from town.  By the time the nice officer arrived, it was too late to go to church.

I was sad when the officer loaded Rover up.  He commented that he probably belonged to an evacuee.  We told him that if they don’t find his owner and he is put up for adoption at the Humane Society, we would be interested.  Since we didn’t go to church, we figgered God would like to know we were kind to one of His creatures.  I bonded with Rover as we hung out together yesterday.  I miss him today.

P.S.  The neighbor lady called later in the afternoon.  Her dog was with her.  She does not know whose dog we found.

Yesterday I posted something called “Don’t Scare Easy.”  It was about the courage of the firefighters at the High Park Fire and people evacuated.  Today I am writing about creatures afraid of the fire.

My wife and I have not been required to evacuate from our home as have so many in Larimer County, Colorado.  We are near some areas that have been evacuated, however.

On Saturday, June 16th, we went into Fort Collins. When we returned home, we saw two large black dogs behind our house.  We do not have black dogs.  We had left our yellow Labs in their pen in the barn.  The black dogs were rummaging in a pile of wood.  My guess is that they were trying to get to some rabbits which live under the woodpile.  The dogs appeared hungry.  They looked up when we drove in and parked, and then resumed their task of hunting rabbits by digging, a method unlikely to bring success.

One of the dogs was a black Lab.  I think it had a collar.  The other dog was much larger and more furry.  I’d guess it was part Newfoundland.

My wife immediately called Larimer County Animal Control.  We suspected that the dogs belonged to someone who had been evacuated from the path of the fire.  She promptly received a return call from an officer who politely thanked us for trying to help the dogs, but candidly stated that no one was available to get them because their department was working to remove animals in the evacuation areas.  We were advised to be careful about approaching dogs on the loose that we did not know.

So I approached the dogs.  I crouched down in a non-threatening position and gently called them.  The lab stopped digging in the woodpile and came a few steps towards me.  The Newfoundland also paused, but then he warily left his task and trotted away, toward our barn.  His action caused the Lab to turn away from me to join his buddy.

In order to avoid a fight, my plan was to get our dogs out of their pen, into our car and up to our house so I could lure the stray dogs into the pen with food.  I would keep them in the pen until someone could come get them, either the owners or an officer from Animal Control.

One of the ways animals that have been separated from their owners in the fire can be reunited is that a photographer friend of ours went to the fairgrounds, where displaced animals have been brought, and took pictures of them.  Then owners searching for their pets can view the “inventory.”

My efforts to proceed with my good plan did not get very far.  The black dogs just kept going, traveling off our property and into a wooded area along the North Poudre Irrigation Canal.  They are on their own, trying to hunt and scavange.  I wish them well.

They are obviously not feral dogs.  They are somebody’s pets.  Their lives have been changed by and challenged by the fire.  I hope they will be reunited with whomever is missing them.  My heart goes out to them all.