The response across the nation to my pre-announcement of my candidacy for the U.S. Senate has been even more greatly underwhelming than anticipated.   Apparently, the Senate has plenty of white males already.  It might be advisable to emphasize diversity within my gene pool.

One of my grandfathers used to say that he was “mixed as the dogs in the streets.”  With fewer dogs in the streets due to leash laws, as well as the greater use of spay and neuter clinics, that saying probably lost some of its impact. Shucks, that was gonna bring me some street cred.

I do have two grandparents born to Swedish immigrants, so I could emphasize a strong Viking heritage.  The new TV series called The Vikings might have  helped in popularizing Vikings, yet I am not certain that will translate into electability.  I need more of an American identity.

Colorado is a western state.  We elected a former Senator named Ben Nighthorse Campbell.  I like Senator Campbell and even met him at a cafe when he was on his way to a meeting and asked me for directions after I introduced myself.

Former University of Colorado  Professor Ward Churchill did not run for office as far as I know, but he knew how to get attention.  Professor Churchill not only offended lots of folks by his comments about 911 being the fault of Americans rather than terrorists, but he also turned out to be a poser about being Native American.  I might have more Indian blood than him.  My gramma, who lived in Chickasha, Oklahoma, claimed to be part-Indian before it was so popular that Professor Churchill wanted to join the Native American club.  I don’t think Gramma knew about the scholarships or she might have gone further than the eighth grade.

On the subject of Native American vs. Indian, isn’t it telling that the American Indian Movement (AIM) organization named itself what it did?  Also, the proud Oglala Sioux at the Pine Ridge Indian Reservation have not changed their sign. 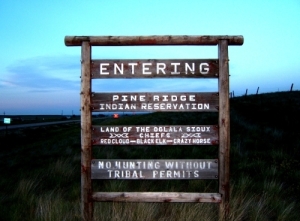 Will Rogers is one of my heroes.  I wish he was still around to be my campaign chairman.

Back to the drawing board……….  I am working on “branding” my campaign identity.  How does the electorate feel about cowboys?

As I do this strategic planning, based on Will Rogers and Gramma, I have decided to open up my campaign staff to Okies, despite my Texan wife’s prejudices.