Archive for the tag “right against self-incrimination”

Rose Mary Woods was a White House secretary who accidentally erased 18 minutes of an audio tape that she was transcribing when President Nixon was asked for such tapes in connection with his impeachment.

I wonder whether Rose Mary left the White House to go to work for the IRS.  She was probably asked to back up Lois Lerner’s computer in order to save the emails requested by Congress when, dang it, Ms. Lerner’s computer crashed.  That inept Ms. Woods must have worked on other IRS computers too because I heard that six other computers crashesd at the IRS.  As bad luck would have it, the six IRS employees who used those six computers are also being investigated.  What are the odds of that happening?  I took Probability & Statistics as a mathematics course many years ago and, golly, even I am astonished by the improbability of all those computers crashing, the very ones containing emails that were being sought.

I am sarcastically guessing that if my computer crashed, IRS technicians could retrieve all information helpful to convict me of tax evasion, were I being investigated.  I have heard that there are IT people who have the capability of retrieving emails from crashed computers.  Of course, in this investigation of the IRS, that is not possible because, as conscientious environmentalists, the IRS destroys crashed computers by some process of recycling that is very green, and very convenient for Lois Lerner, who “took the 5th.”  Those of us who are trained in the law, formally or by watching TV, know that is saying that one cannot answer because answering could incriminate oneself, and the 5th Amendment to the Constitution protects one from self-incrimination.

I once claimed that my dog ate my homework.  It did not work then either.  I still had to produce the homework, or flunk the assignment.

Lois Lerner might have a dog who crashed her computer, or maybe Rose Mary Woods has a dog and brought it to work.  It could happen. 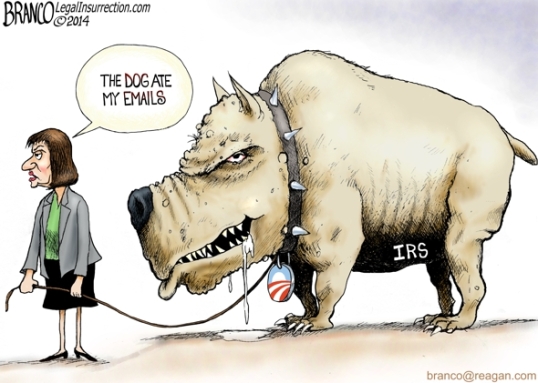