Archive for the tag “training a puppy” 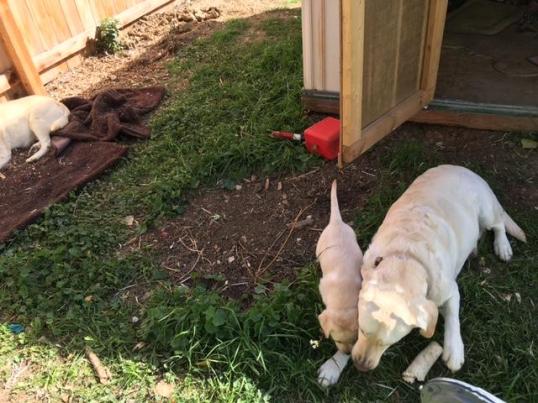 “In me you see a relic from a long-lamented age, when masculine behavior wrote a grand romantic page….”    With a Sword and a Rose and a Cape song from the musical Carnival

I pride myself on masculine behavior.  It troubles me when a male fails to display such behavior.

Now, don’t get me wrong.  I love our new puppy, Gus.  However, it disturbs me that Beau and I are so utterly masculine while Gus, (well, how can I say this delicately?), pees like a girl.  That, my friends, is where Beau and I draw the line.

As shown in the photo above, Beau has been mentoring the puppy about bones and life in general.  I have been hoping that Beau’s example of lifting his leg during urination would teach Gus how it is done in the male dog world.

Since that has not worked so far, I guess I will have to take a stab at it.  Perhaps I am viewed as more of a leader.  I will let you know.  Good thing we have no neighbors within view.