Fine Art and the Pig

Those of us who know Miss Sugar, my trophy wife, know that she is what she calls an “art advocate.”  That means she plans events where local artists can get exposure and even sell their art.  Those of us who know me know that I am not an artist, exactly, but I showed great potential in junior high, before middle schools were invented.  Since then, I have cut back on my creative endeavors into the visual arts, unless you count building our courtyard, which is a thing of beauty, including a wall made of empty wine bottles.  The wall is not portable, so I did not display my works at the art show and silent auction yesterday.

Some really good artists did participate, as well as some non-artists, including a pig named Sausage.  Sausage was there with some friends, each in the role of  marketing assistant.

Miss Sugar, you see, had organized the event yesterday as a fundraiser for the Rist Canyon Volunteer Fire Department.  Remember the bad wildfire called the High Park Fire here in Larimer County, Colorado?  Well, the Rist Canyon fire department even lost one of its fire stations in that bad fire.  So Miss Sugar, who is nicer than me, thought of the fundraiser and spent many hours recruiting artists to donate to the silent auction as well as artists and artisans to pay booth fees to sell stuff.  And she recruited me to set up tables and carry pictures and pottery and the like.  Which is very important.  I don’t know what she would do without me.

Although I suspect many women in the community attended in hopes of taking a gander at me, none actually stated that out loud, probably because Miss Sugar was there.  Besides me and the art, another draw was Sausage.  Here is how it was explained to me by his owner — when he walks a pig or llama or goat, all of which were there taking turns, people notice and ask, “Why are you walking that pig (or llama or goat) down the street?”  Then he can say, “Since you asked, I am getting attention for folks here in Old Town Fort Collins to ask that question so I can tell you about the Rist Canyon Art Show and Silent Auction.”  That is an effective marketing technique.

So, in addition to the power of my personal presence as an advertising method, Sausage, the llama and two goats attracted some attention as well.  It was a fun art show.

Another fun thing Miss Sugar did was offer face-painting and cotton candy.  I, personally, am not allowed to paint faces, preferring to leave that up to my trophy wife.  However, with respect to cotton candy, who do you think carries the cotton candy machine?

Now, let us turn our attention to yet another interesting aspect of the afternoon.  I have hauled livestock in horse trailers and stock trailers pulled by a pickup truck.  You have seen me and people like me doing that.  What you may not have seen, nor had I until yesterday, is a Jeep Cherokee containing a llama, pig, and two goats.  It is an amazing sight.  I can show you a photo below.  You will have to use your imagination concerning the odors within that particular SUV.  I remain unconvinced about the advantages of hauling livestock without a trailer. 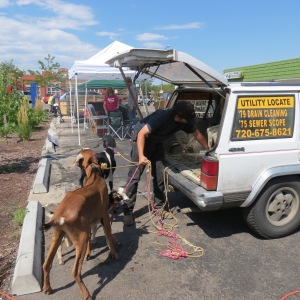 One thought on “Fine Art and the Pig”